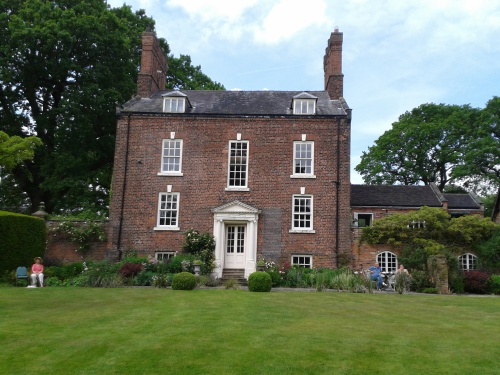 Nana Mouskouri, remember her singing this?

Globally speaking the biggest selling female artist of all time. As a multi linguist she sold all over Europe, America and Asia. Quite surreal to think of this young woman from Crete singing about native English flowers and gardens.

This garden is in Cheshire. Very close to home. The Dower house to a big estate, and open annually for charity. I love it here. An oasis of tranquility, adjacent to a beautiful boating lake swamped in yellow lillies, and overlooking a village green opposite a cluster of ancient cottages reserved for estate workers.

The garden to be absolutely frank, isn’t the most cultivated or colourful or groomed, but I like it for those reasons. The English love a good nosey, and here is the perfect excuse, pay a couple of pounds, wander round the borders and the arboretum, and pretend, just for a short while that you are Lady of The Manor, about to disappear indoors to prepare for dinner, you’ve maybe been out earlier with your trug, collecting rose blooms for the table, not it’s time to break out the pearls and enjoy a glass of chilled champagne in a crystal coupe.

If you’re going to have a dream, have a big one!

It’s possible the more observant amongst you may have noticed a recent blogging hiatus.

Now I live near here: 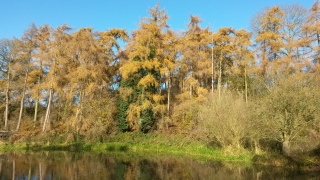 And take the dog for walks here:

In the countryside. Proper rural. With mud and tractors and a real pub.

And I can see the stars at night. So many stars. In a vast inky sky.

Where is your favourite dog walk?

And if you don’t have a little canine pal, where is your favourite walk that involves a proper pub?

My house is currently on the market.

For Sale. On the crest of the housing market boom. In the bubble.

There’s an offer on the table. HOORAH. It’s a paltry offer. BOO.

Meagre. Scanty. It wouldn’t even buy me the chimney stacks on the Old Parsonage. The pretty, perfect Parsonage with its pilasters and pediment, its Flemish bricks and fossil finials. I want to live here. In a real life Doll’s House, with its sexy symmetry and glamorous garden. Why can’t I live here? Why shouldn’t I aspire to neo-classical neatness and Georgian Gorgeousness?

Because, peeps, because I suffer from the joint diseases of  impecuniosity and proletarianism. I wasn’t born with a silver spoon shoved where the sun don’t shine. All I’ll inherit is a very dubious Ercol dining suite. But one can dream, and one can pretend, which is why we ended up at The Old Parsonage in Arley, Cheshire, last Sunday. 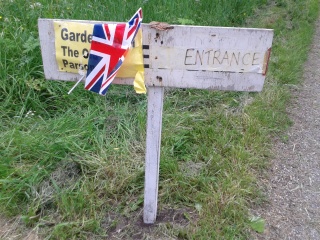 The National Garden Scheme – Yellow Book –  features gardens in the UK not normally open to the public. Perfect if you are nosey like me. 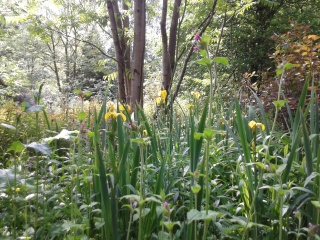 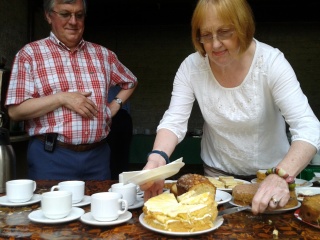 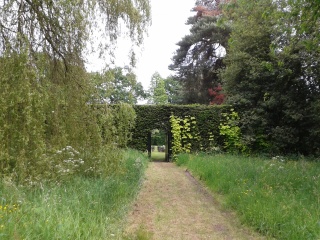 The Dee estuary, viewed from Hilbre Island, on the Wirral.

This is a beautiful spot on the North West coast of England.

Also one of the most polluted places in Western Europe.

Well worth a visit. But not on  a Bank Holiday.

Never seen so many Wannabe Wags in One Place. 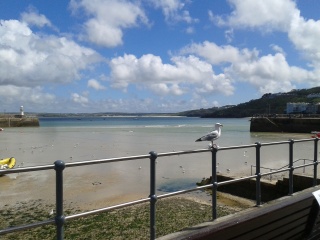 So following on from a very successful trip to North Wales, where – hold the front page – IT DID NOT RAIN ONCE! We decided to chance our arm with another staycation and head for Cornwall.

Kernow, (Cornish for Cornwall my lovers) is a Celtic Nation.

The Corns, Kernovians, Cornishers (?) were proudly celebrating, having just been awarded minority status.

This means the UK has promised to protect the rights of minority groups to “enjoy their own culture, to use their own language, to establish their own schools… and practise their own religion”.

I thought I’d share some of this culture, which we certainly enjoyed, oh yes my handsome:

As the rather delicious smoothies were washed down with:

Followed by pudding, from this Michelin Starred Ice Cream Van: 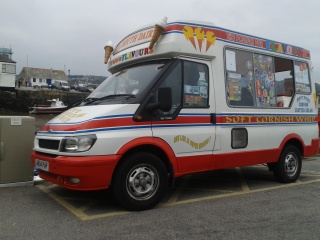 ‘One lick is never enough’ – states the flourish on the van door, and it wasn’t, leaving a disappointed dog: 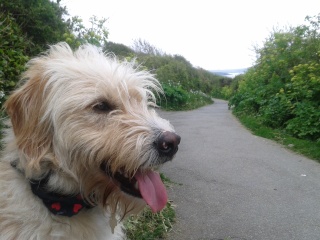 So, after a quick walk/stroll/amble along the South West Coast Path spotting ship wrecks at Coverack:

It was time for refreshments – Cornish Afternoon Tea – jam goes on first, then cream in Cornwall:

Well, that filled a hole, but having arrived back in Falmouth, we decided Fish and Chips might be in order for supper. However, first we bought beautiful bread from this bang – on bakery:

Before joining the queue here at the Best Chippy I’ve been to since the last one I went to: 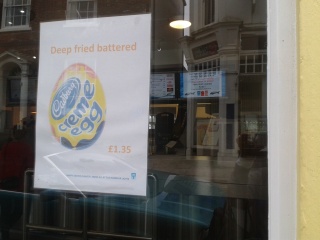 And on that note, I’m signing off and heading for my hand bag where there should still be some Indigestion Tablets lurking.

Where in the World?

So PoshPedlar has been away again, hence the acres of silence through the ether.

And more importantly, more lush lovely objects to look at!

George Orwell wasn’t a fan.
Of dying metaphors, that is, I’m not sure whether he was a fan of windmills or not.

It is an awesome thing to watch wind captured, to witness invisible swirls and draughts caught by, embraced by huge lumbering sails.
That great gigantic beehive coaxed into action by gusts of breeze and bluster.
Not just the wheat or barley adding grist, but the wind itself.
Without wind – grist grinds to a halt.

Which is what Orwell would have preferred:

‘Dying metaphors … a huge dump of worn-out metaphors which have lost all evocative power and are merely used because they save people the trouble of inventing phrases for themselves. Examples are: Ring the changes on, take up the cudgels for, toe the line, ride roughshod over, stand shoulder to shoulder with, play into the hands of, no axe to grind, grist to the mill…’

What dying metaphor would you add to his list?
Or have you invented your very own cliche?

My donation is not a metaphor, nor a cliche.
But it is the most overused/misused word in the history of words. And that is:

Anyway. I absolutely must go. I’ve got grist to grind.

Forgive me, I haven’t been in touch for a while.

I’ve been abroad, over the border, across the water.

To Wales. For the Weekend.

It’s worth writing about, because it’s the first time I’ve been to Welsh Wales for many years, having sworn never again – after two or three soggy, sodden, torrential, miserable visits in a row – would we venture into the land of Barabrith, Laverbread and Leeks.

We’ve all been there, flicking through the glossy Travel Section, pausing over some quaint Fisherman’s Cottage, or Shepherd’s Retreat. Or Drover’s Den.

What fun! Log burners, and Scrabble, and walks along the beach…

The reality is the log burner spews out the cheap wet hunks of whatever, bought from the petrol station, and Scrabble ends in tears, too much cheating, too few vwls, and walks along the beach are tricky in Force 9 hail storms.

NO INTERNET. NO FOOTY ON SKY.

NO GARLIC/ROCKET or Organic Ice Cream. No Villa Maria.

Back to basics. But who wants basics? On holiday? Who wants to be wet, and cold and somewhere else?

So this weekend was a gamble. An outside chance. And it galloped home. I’m even thinking about booking again. But the possibility of four consecutive days of sunshine is remote.

For the time being, I’ll look at my photos and smile – warmly – inwardly, and share two or three. 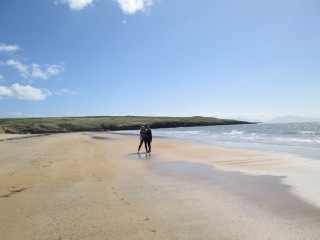 So no bijouterie or beautiful bits and bobs today.

The Co-operative – here for you for life

I met a lady from far away, whom, whilst showing me her wares, (a cardboard suitcase oozing vintage scarves) whispered I should visit a market in a Northern town.

Hope Mill. Or rather Hope Mi.l, according to the sign on the fir green door, not so much dark and satanic as dank and sagging.

The smell was overwhelming, growing stronger as I paced towards the bustle of the Market Hall.

Stalls set out in a square grid. Anything from armless Action Men to rampant bronze lions. With a great deal of CD’s, chipped plates and Chinese fakery in between. But it was good. Interesting. Very busy, and shouty. Lots of activity; banter, buying, bartering. I bought. Earrings, cufflinks and two bulbs of smoked garlic. I put back a Losol jug. Which I now regret of course.

It began to rain. I asked a woman with dreadlocks and creamy cappuccino skin to suggest a decent cafe.

The Bear. Deli downstairs, eatery upstairs via a staircase Scarlett O’Hara wouldn’t sniff at. Was once The Co op, when once the Co op stood for Caring and Sharing. Unlike now. Help yourself why don’t you?

Pink lemonade in a silly ballon and celeriac soup in a bowl with basil and bread like this: 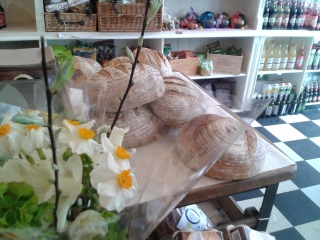 They like their chow in this Northern town. And they’re happy to share it.  The ‘Incredible Edible’ project plants orchards and vegetables in unused spaces around the town. For everyone to partake. Cherry trees in the car park, and flocks of herbs along the canal.

What a marvellous idea. Prettify brown sites, rally a community, eat your greens.

“Rather than turning over a new leaf, prune your tree so that new leaves continue to blossom.”

Photograph taken this morning at Denzell Gardens in Cheshire.
Click on the photo for an interesting read about North West England’s heritage.

Let me know if you recognise the species… some kind of Cherry?